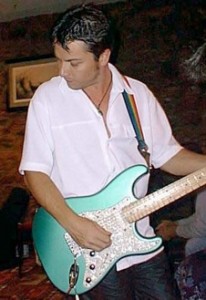 Started out as a dreamy youth staring up at Freddie Mercury & Brian May thinking ‘I wanna do THAT!’ Instead confusingly weaved through succession of unsuitable jobs including DJ, Teddy-bear importer/exporter, Financial advisor and manager of the local snooker club.

All the while unaware that a brief moment during adolescence had planted the seeds for a career that would not materialise until many years later. Father, Tony Last, a Pontins bluecoat and Musical Director had in 1979 borrowed one of the first ever video cameras from a friend at the BBC. Who knows what he wanted it for, but suddenly Mike’s house was a popular place to go to bunk off school, and thus began an early interest in home movies.

Finally in 1991 accidently learned the D chord then tumbled rapidly into the mysterious and enchanted world of music.

Grew long hair and moved to London in 1993. After playing in Floyd-esque pub band ‘Don’t Panic’ for a bit broke away to pursue solo career, playing a variety of venues across London and the South coast. Once established, sought an activity for the daytime then spotted a place to learn something new and party perhaps harder than was ever before possible – university.

Suddenly remembered interest in video cameras, so chose Film & TV. Met Nick Harper in the Half Moon, Putney 1997, unaware at the time that this particular artist would later become a key influence in both music and video. Continued gigging throughout studies then made first documentary ‘Karaoke Uncovered’ in 1999. This would not be the last.

After working in France returned to home town Torquay ready for the new century and juggling both of his creative pursuits, although as yet unknown to the world as a film maker. Worked as a journalist in South Devon writing reviews and photographing gigs throughout 2002/4 for Muse, Paul Weller, Tina Turner, Pet Shop Boys, Queen and others. 2006 hooked up with long-time friend Barnaby Dine, forming a song-writing partnership and embarking upon Mike’s first ever solo CD, deciding to take the job a bit more seriously.

Supported EZIO, Derrin Nauendorf, Pete Christie at MR KYPS in Poole, then Nick Harper in Exeter, who had by this time invited Mike to produce his first ever DVD release, on sale from April 30th 2007.

Became a more accomplished film maker when directing & producing the Nick Harper DVD ‘Love is Music’, which achieved critical acclaim with reviews here. Following the usual promotional campaign for the CD ‘FIRST’, returned to full-time performance by night, Documentarian by day until 2009 when started cashcats.co.uk supplying cool gadgets to the UK (meow!)